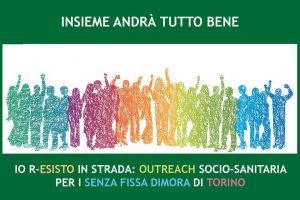 From 1 April it is active "I R-exist in the street: socio-health outreach for the homeless in Turin". The project is aimed at the homeless population of Turin to support them in the current health crisis due to the spread of COVID-19. Currently the homeless are facing a phase of serious difficulty as they cannot in fact respect the rules of prevention and social isolation necessary to defend themselves from the possibility of contagion from Coronavirus. Furthermore, many services normally dedicated to them have been suspended and the project will allow them to resume health education and drug distribution activities at clinics in Via Nizza and Via Saccarelli.

The homeless are the most fragile section of the population from a social, economic and health point of view. In Turin alone, more than 2.000 homeless people are estimated, not considering the "invisible" in the count, individuals not reached by any service or in transit. Many of these people already face numerous problems including homelessness, job loss and social isolation. From a health point of view, many of them are affected by chronic diseases linked to the conditions of life on the street, therefore to the lack of shelter, poor nutrition, scarce opportunities for personal hygiene and health care.

The city of Turin has repeatedly proved capable of organizing a dense network of services in response to the different needs of the homeless (dormitories, canteens, clothing and food distribution points, social clinics and public toilets). However, the COVID-19 health emergency is attacking this segment of the population very hard, which remains among the most exposed to the risk of contagion and sees a reduction day by day in the services on which it can rely to respond to its basic needs.

For a homeless person it is difficult, if not impossible, to comply with the hygiene and health rules useful to protect themselves from contagion. It is not always possible to wash hands or implement social distancing. The same invitation to stay at home is particularly bitter for people who only know the possibility of an allotment for the night but, in fact, have nowhere to stay in the remaining hours of the day.

The life of the homeless is marked by the satisfaction of basic needs that cannot be postponed and many of these, sleeping or eating, necessarily involve the sharing of common spaces. These characteristics make it crucial to take a targeted approach to the prevention and health protection of people who, for various reasons (lack of a fictitious residence, because of illegal foreigners or because of stigma and shame), cannot refer to a general practitioner.

In addition to being a question of protecting the health of the most vulnerable, which, like that of other citizens, must take priority over any other consideration, we must not overlook the potential repercussions in terms of public health, of abandonment to self-management of over 55.000 people who live on the street on the national territory.

“Io R-esisto in strada” aims to set up social and health assistance activities, providing listening, health education and distributing over-the-counter drugs and hygiene kits to the homeless. In addition, a telephone support service will be organized, managed by medical personnel, aimed at operators of day and night shelters, canteens, food and clothing distribution.

The “Io R-esisto in strada” project is carried out in collaboration with CCM - Medical Collaboration Committee. World Friends has been collaborating for some years with CCM in projects aimed at homeless people at the clinics in Via Saccarelli and Via Nizza. As part of these collaborations, health education and guidance activities were carried out, as well as the distribution of over-the-counter drugs which will now be resumed.

World Friends and CCM have held intense communication over the last few weeks with the Adults in Difficulty Office of the city of Turin, to which they have presented their availability, given the closure of the centers where the clinic was located, to make themselves available of other realities that could benefit from the health skills, and the presence of volunteers, of the two associations. From this availability offer, the Office has identified a reference number for health situations worthy of attention.

The “Io R-esisto in strada” project was carried out with the support of Compagnia di San Paolo Foundation as part of the call "Together everything will be fine".

END_OF_DOCUMENT_TOKEN_TO_BE_REPLACED

The strength of Hippocrates - 10

END_OF_DOCUMENT_TOKEN_TO_BE_REPLACED

Facebook Twitter Pinterest linkedin Telegram
Dr. Paolo Leoncini, head of the health projects of World Friends in Turin, continues to update us on the situation regarding the activity ...

END_OF_DOCUMENT_TOKEN_TO_BE_REPLACED

HIPS-TB: the project to fight tuberculosis

END_OF_DOCUMENT_TOKEN_TO_BE_REPLACED

No to Female Genital Mutilation

END_OF_DOCUMENT_TOKEN_TO_BE_REPLACED

Facebook Twitter Pinterest linkedin Telegram
On the sidelines of the work of the International Conference on Population and Development (ICPD) that is being held in these days ...

END_OF_DOCUMENT_TOKEN_TO_BE_REPLACED

Facebook Twitter Pinterest linkedin Telegram
On the sidelines of the work of the International Conference on Population and Development (ICPD) that is being held in these days ...